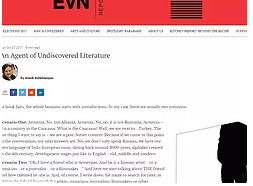 I am a diplomat, and the books are ambassadors, they are extraordinary and plenipotentiary representatives of Armenia and Armenians, and they need to talk in the languages of the world to be heard ultimately.

Arevik Ashkharoyan, the founder of ARI Literary and Talent Agency, shares her experience as a literary agent for Armenian literature and representing the novel Goodbye, Bird by Aram Pachyan featured at EVNReport.

“Scenario One: Armenia. No, not Albania, Armenia. No, no, it is not Romania. Armenia – it is a country in the Caucasus. What is the Caucasus? Well, we are next to…Turkey. The last thing I want to say is – we are a post-Soviet country. Because if we come to this point in the conversation, my next answers are: No, we don’t only speak Russian, we have our own language of Indo-European roots, dating back around 3000 years, alphabet created in the 4th century, development stages just like in English – old, middle and modern.

Scenario Two: “Oh, I have a friend who is Armenian. And he is a famous artist… or a musician…or a journalist….or a filmmaker…” And here we start talking about THE friend and how talented he/she is. And, of course, I write down the name to search for later, as obviously, I don’t know all the artists, musicians, journalists, filmmakers or other Armenian talent from all over the world.”